Young of Kentucky and, in the ensuing years, reformulated and rebranded it to compete with Skippy and Peter Pan. P. & G. named its product Jif, used oils other than peanut oil in its hydrogenation process, and sweetened the recipe, adding sugar and molasses. The original Creamy and Crunchy style Jif peanut butters both debuted in 1958. In 1974, Extra Crunchy Jif was introduced, followed in 1991 by Simply Jif, a peanut butter variant with low sodium and less sugar than regular Jif. Reduced Fat Jif was introduced three years later in 1994. In 2014, Jif Whips was released as the first whipped peanut butter.

Since 1981, Jif has been the leading peanut butter brand in the United States. 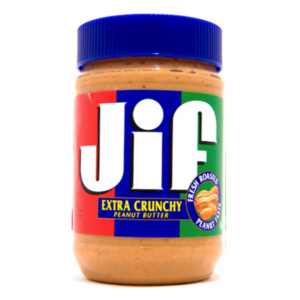 £5.99
Jif is a brand of peanut butter made by The J.M. Smucker Company, which purchased the brand from Procter & Gamble in 2001. The original Creamy and Crunchy style Jif peanut butters both debuted in 1958.
Add to wishlist
Add to cart
Quick view